Moroccan rugs are masterfully crafted from old-world looms and designs. Their intricate and vibrant patterns are unlike anything produced in other parts of the world. These rugs bring a touch of history into your home and add both color and personality to any space. So what’s special in Berber rug? How are they made?

Moroccan women’s textiles are part of the visual history of the country. Morocco’s rural Berber women used rugs as a medium through which to express their creativity. They had to learn the techniques and methods of weaving from different masters. In their work, Berber Moroccan women were able to express themselves and their spiritualism. They use age-old techniques to create rugs that are abstract as it gets, but so intricate and complex that it’s hard to tell where the weaving begins or ends. The patterns and colors used in these Moroccan Berber rugs are like an expression of their national identity with deep meanings.

Usually, two women sit in front of each other at a table with a loom. They sit so that the rug is always in front of them. They push the carpet forward and it goes around the loom. They can only see the end part of the carpet as they are working. So the weavers have to use their memory about the pattern they are drawing on the rugs. In this manner, they can express fully their creativity. It’s all rooted in their tradition and they have the freedom to make however they want. That means they can use their imagination and make the carpets in a very surprising way.

Shearing is a unique part of the process. Men mostly do this process by immobilizing the sheep on the side and scissors are used to obtain the fleece. Sheep are not just sheared once, but twice a year and it takes 50 to 100 sheep to get the wool to make a standard rug.

Shearing is a unique part of the process. Men mostly do this process by immobilizing the sheep on the side and scissors are used to obtain the fleece. Sheep are not just sheared once, but twice a year and it takes 50 to 100 sheep wool to make a standard rug.

Now ladies comb the wool and separate it from the sheep hair. Then they wash it in the water of the river, removing all of the dirt, sand, and other debris. After that, put it in sunlight to whiten and dry. It’s a long process until the wool is sorted. 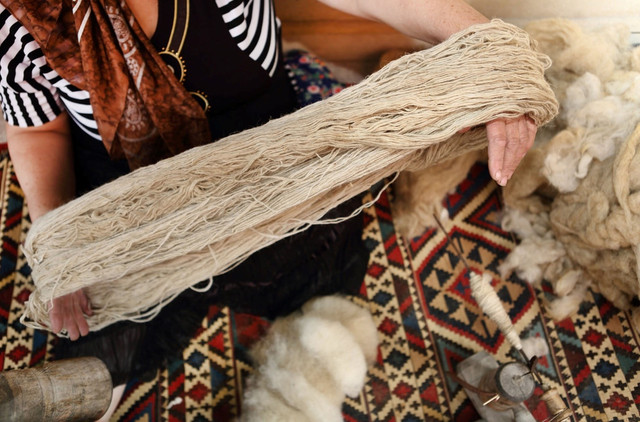 The process of carding wool is an important initial step in the manufacturing of wool fabric. First, the wool is washed, and then it is cut into uniform lengths. The wool is then placed onto a spindle that has spikes on it. The spindle is used to comb the wool, which makes sure that the whole wool gets untangled and gets oriented in a single direction. After that couple of wooden planks (imchden) are used that move back and forth to work the wool. 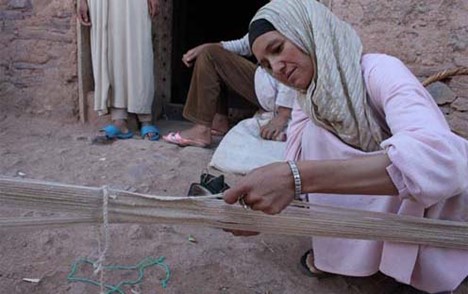 Once the wool has been carded it is prepared to be spun. A tool called “drop spindle” is used at this phase it has three chunks, the stick, the weight, and a hook. The first step is to attach the fleece to the hook of the spinner. Next, spin the spinner in a circular motion to create tightness. This causes the fleece to pull out more easily. As the fleece is pulled out, it also creates soft waves in the yarn.As you spin the stick, gently draw out the fleece with your left hand. Continue drawing and spinning until each strand of the fleece is pulled out. The yarn is again put on the spindle and then the hook comes to work to keep all things in place. The whole process is done again and again and fleece is turned into yarn.

The next step is to again wash the yarn and put it in the sunlight to dry and store it till the loom is ready. 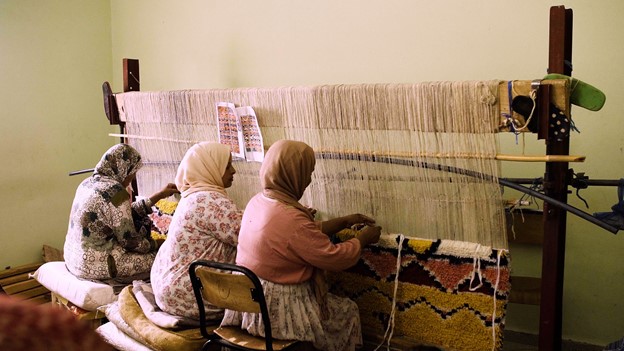 For weaving three tools are necessary a comb, a couple of scissors a knife with a hook. Now the colors of yarns that should be in the rugs are suspended on the loom and used accordingly. The weaver moves the yarn back and forth between two pieces of cloth with the help ofa knife’s hook. Then the weaver pulls the yarn and cuts it with the help of a knife. This process is done multiple times horizontally until all the knots are completed. The weavers then use a big comb to make the knots stay in their place. The weaver then does this over and over, row after row, knot after knot, until the whole carpet is done.

After all these procedures carpet is ready to sell in the market. The Berber men take these rigs to the market and try to sell them in different markets in different villages. The market will be full of these rugs made by different families. Each family tries to make a unique Moroccan rug and stand out in the market.